It is estimated that about 5.8 million people in America have Alzheimer's disease, and that it affects about 1 in 9 people over age 65.

Since it causes cognitive and physical decline–sometimes rapidly–loved ones and caregivers make up the majority of online posts about the condition.

What are they posting about? And what therapies are giving people hope to alter the course of the disease? 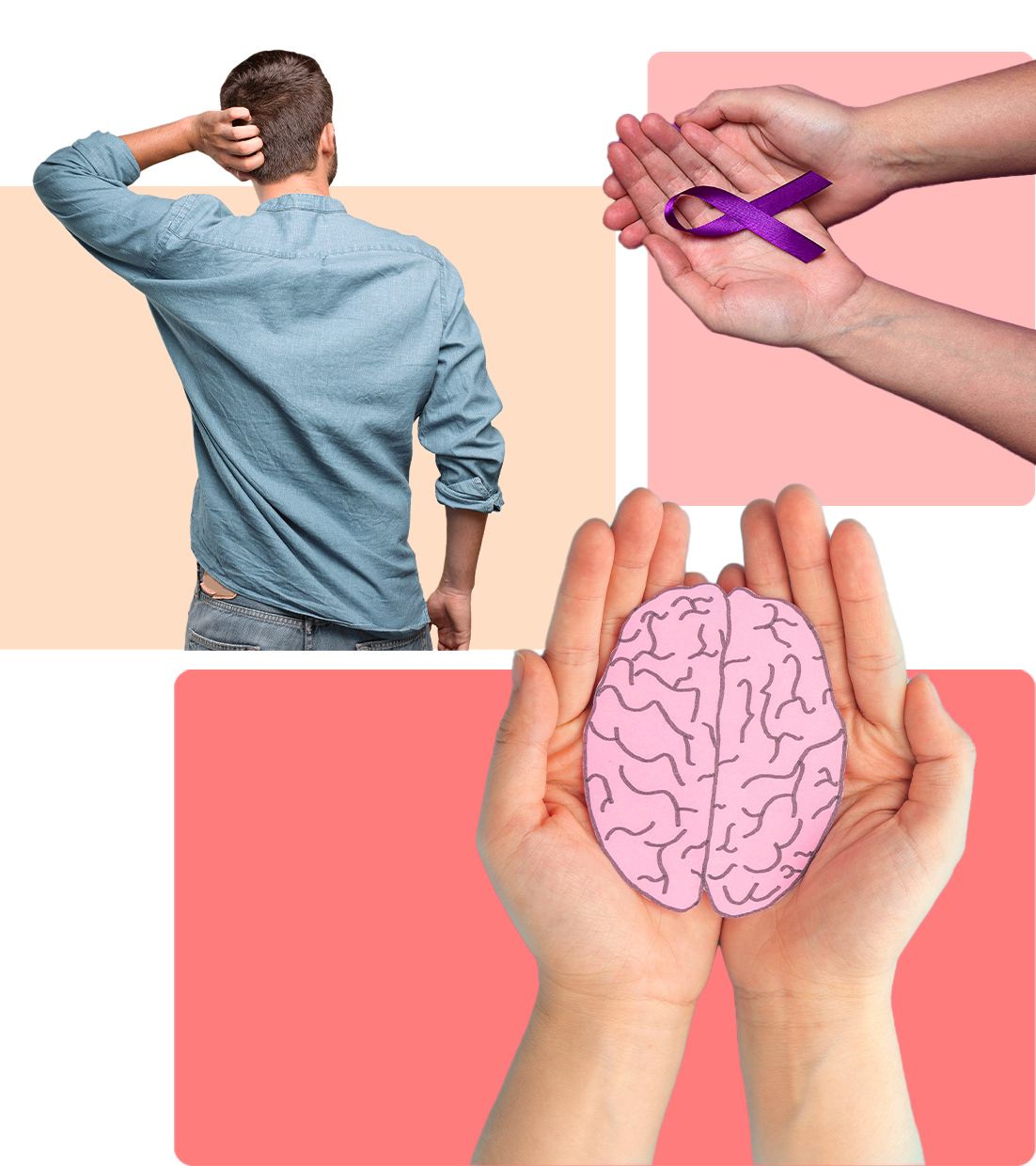 The Trends Section provides an overview of some of the most recent and relevant topics that relate to particular health conditions.

It features a selection of the topics that have the fastest growing Google search interest across the last three months, and reflects the inquiries of patients, healthcare providers, scientists, and others who are invested in the topic.

This is valuable to understand people’s interests and concerns at the present moment, and often include the U.S. states that have the highest interest in a topic.

Quilt.AI brings these trends to life through an analysis that incorporates both cultural and scientific lenses.

What top selling drugs for Alzheimer's Disease are trending on search? 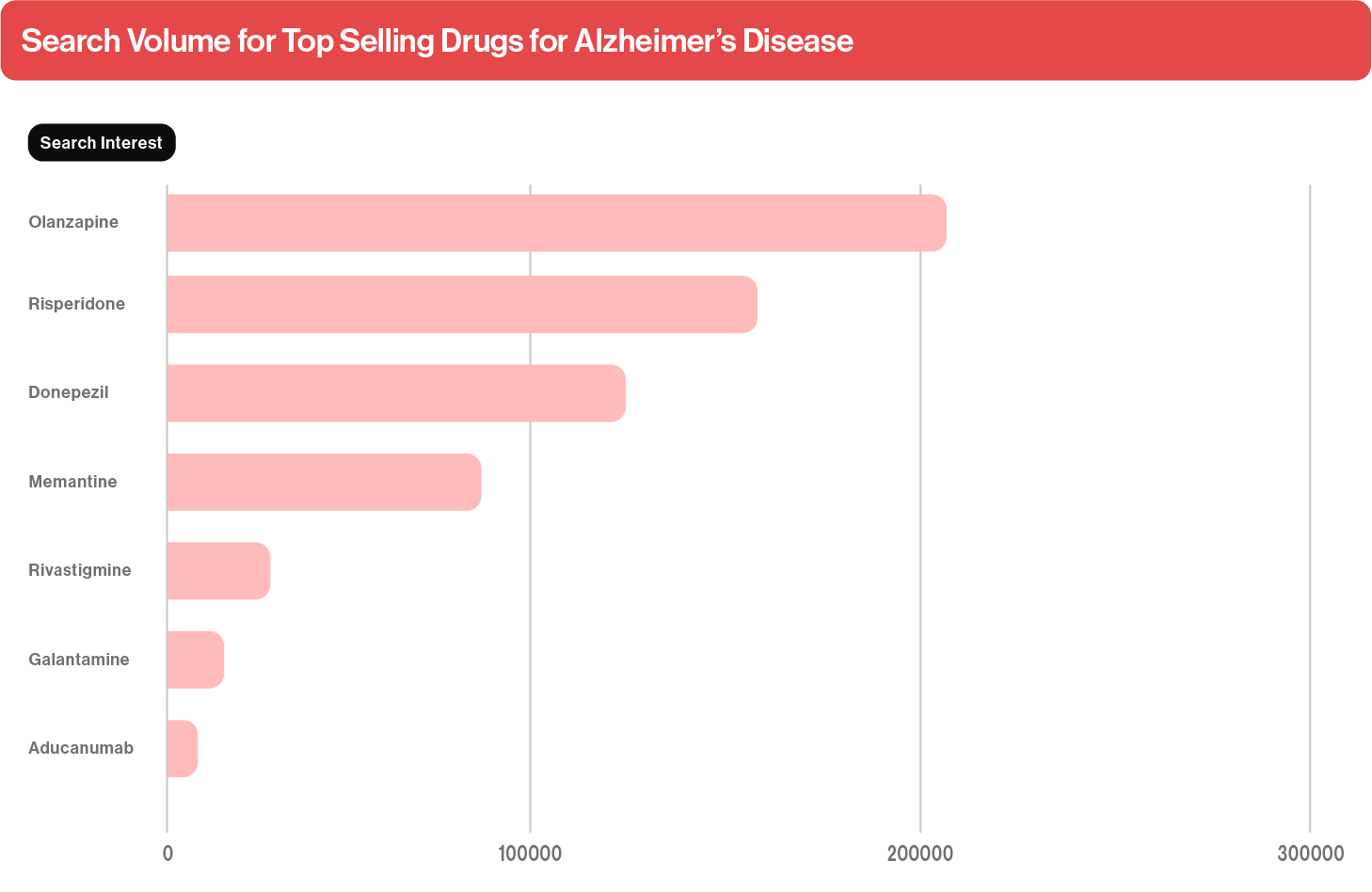 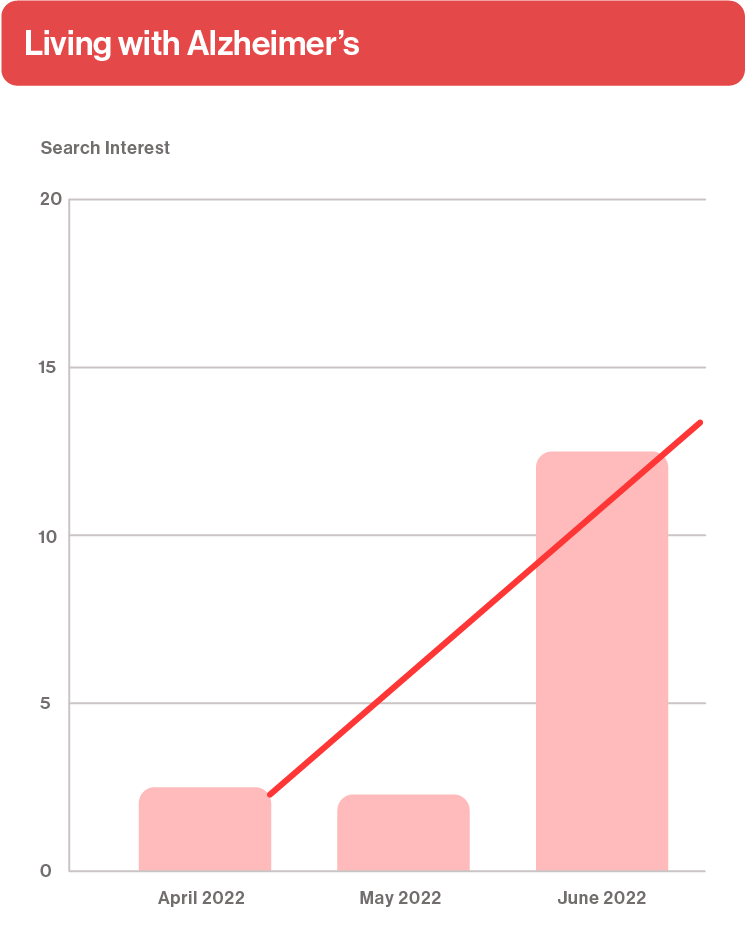 There was a significant increase in search interest, particularly in Florida, for the search topic ‘living with Alzheimer’s.’ Searches for this grew significantly in June, which was Alzheimer’s and Brain Awareness Month and likely when more people were making inquiries to understand the condition.

Alzheimer’s disease is a progressive, neurodegenerative condition that results from the death of nerve cells in the brain. Gradually, the disorder causes the brain to atrophy (shrink) along with a steady decline in mental function (memory, thinking, judgement, communication) and profound changes in personality and behaviour. People with Alzheimer’s experience three stages of the disease (early, middle, and late) that increase in severity over time, and live an average of four to eight years after their initial diagnosis. Typically, symptoms first appear in people over 65, although early-onset cases do occur in younger people.

The search term ‘living with Alzheimer’s’ can mean different things, including how to live with the disease once one receives a diagnosis, and how one can care for a loved one who has Alzheimer’s. As the condition progresses, there are many daily implications that must be considered as patients gradually lose the ability to care for themselves and many exhibit symptoms that make caregiving very challenging (e.g. restlessness, aggression, hallucinations, mood/personality changes, wandering, impulsive/inappropriate behaviour, seizures).

Search interest for the drug donepezil (brand name: Aricept) has increased over the last three months, with most of the searches coming from New Hampshire, Tennessee, Kansas, Massachusetts and Colorado.

Donepezil is one of the top-selling drugs that are prescribed to manage the symptoms of Alzheimer’s disease. It belongs to a class of Alzheimer's drugs known as acetylcholinesterase inhibitors, which work to increase the amount of the neurotransmitter acetylcholine in the brain, leading to improved communication between nerve cells. For those with Alzheimer’s, it eases disease symptoms by temporarily improving mental function (memory, attention, social capabilities, communication, the ability to carry out daily activities) and treating dementia (confusion). It does not cure the disease or prevent against future mental decline.

The higher search interest may be partially explained by the FDA’s approval of new product Adlarity (donepezil delivered via transdermal patch) to treat Alzheimer's-related dementia, in March. 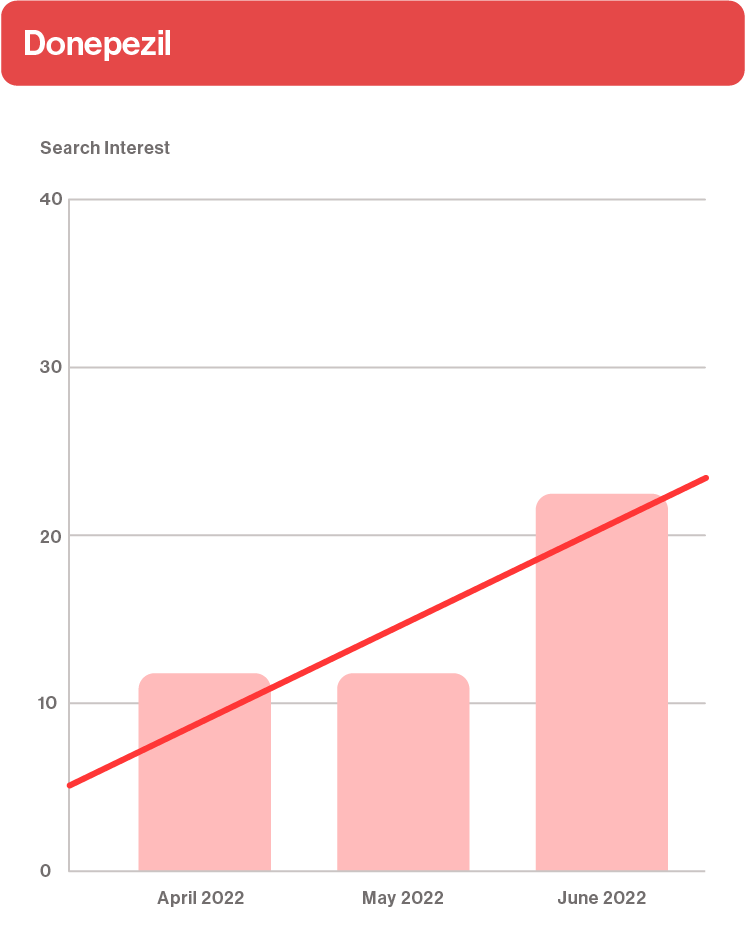 Search interest for donepezil as a topic under the Neurological Conditions category grew by 85% over the last 3 months, from April 2022 to June 2022. 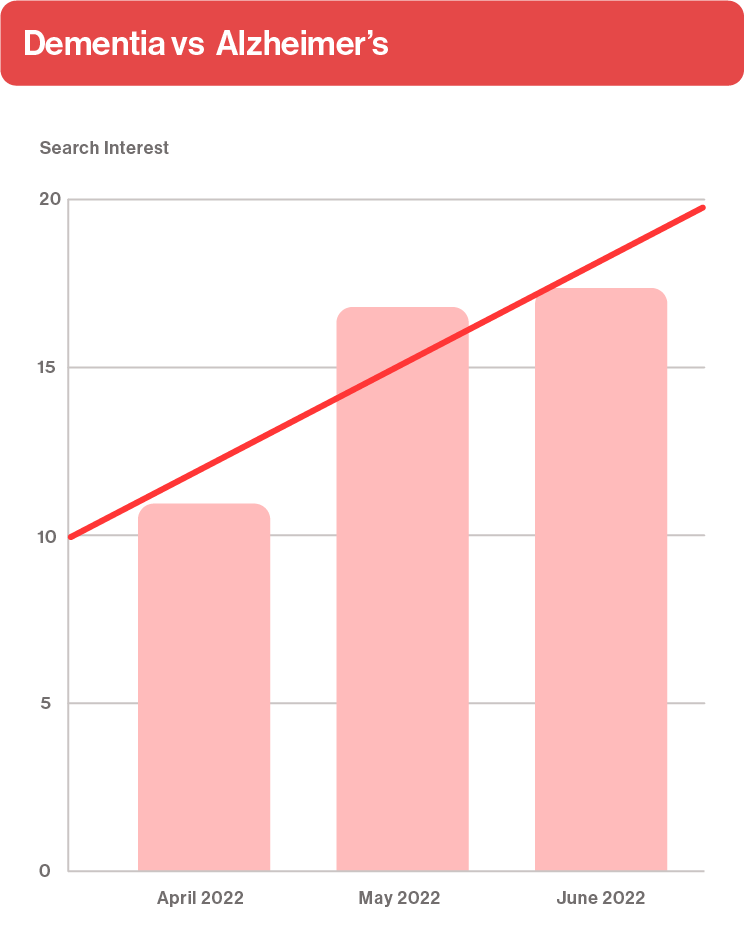 Search interest for the topic ‘dementia vs Alzheimer’s’ increased steadily from April to June. The searches mostly originated from Utah, Indiana, Oklahoma, Ohio and Arkansas. It is not uncommon for people to use ‘dementia’ and ‘Alzheimer’s’ interchangeably, and it is important to understand the distinction between the terms – especially when a diagnosis of one is given.

‘Dementia’ does not refer to a specific disease, but is a general term for symptoms that encompass impairments in memory, thinking, reasoning, or decision-making that interfere with everyday activities. It commonly manifests as confusion and poor judgement.

Alzheimer’s is a specific brain disease that accounts for 60-80% of dementia cases; it is both a type of dementia and a cause of it.

Alzheimer's disease can only be confirmed when brain tissue undergoes microscopic examination during an autopsy. The condition can be then distinguished from other forms of dementia by characteristic changes in the brain tissue.

The drug etanercept (brand name: Enbrel) is a widely prescribed anti-inflammatory drug approved to treat rheumatoid arthritis, not Alzheimer’s disease, but it was nonetheless trending under Google’s  ‘Alzheimer’s Disease’ search category over the past three months. Searches were highest from the states of Alabama, Arizona, New York, Michigan and North Carolina.

The interest in this drug in conjunction to Alzheimer’s can be explained by ongoing public dialogue referencing a 2015 trial in which etanercept appeared to reduce the risk of Alzheimer’s disease by 64%. Pfizer, the drug’s maker, analyzed hundreds of thousands of insurance claims to reach this conclusion, but they decided that confirming these findings in human participants would be too costly and go against scientific principles that they felt would predict this trial’s failure. Several popular news articles came out in April that revived the topic yet again, and focused on TNF inhibitors (the class of drugs to which etanercept belongs). Because there is currently no cure for Alzheimer’s (only drugs that can temporarily reduce symptoms), it is likely that people are still considering this therapy in a hopeful light. 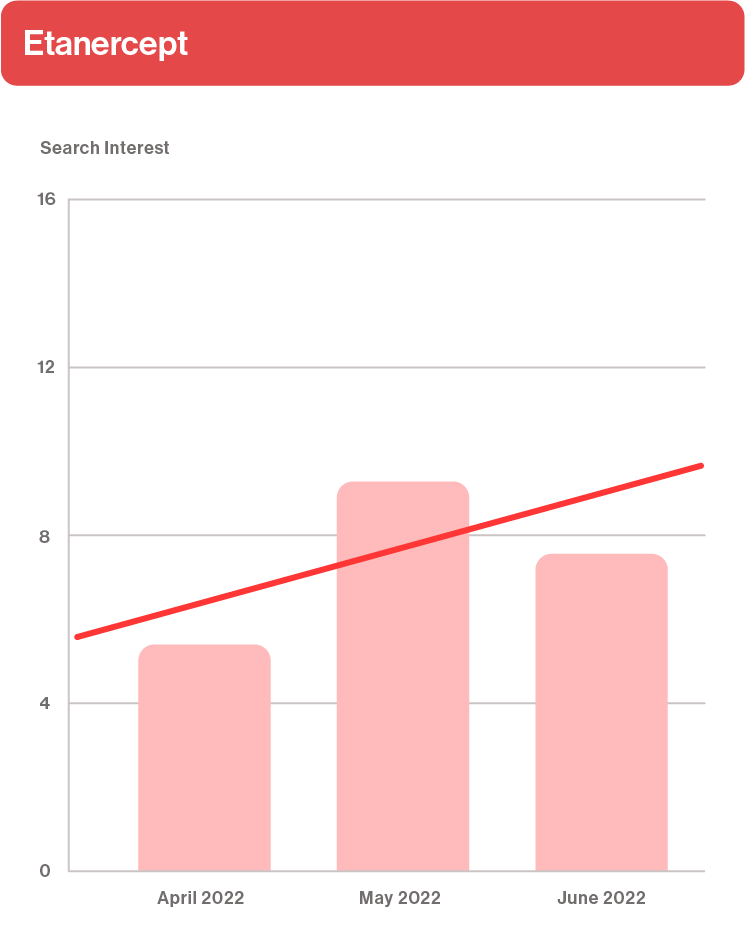 Search interest for etanercept as a topic under the Alzheimer’s Disease category grew by 50% over the last 3 months, from April 2022 to June 2022. 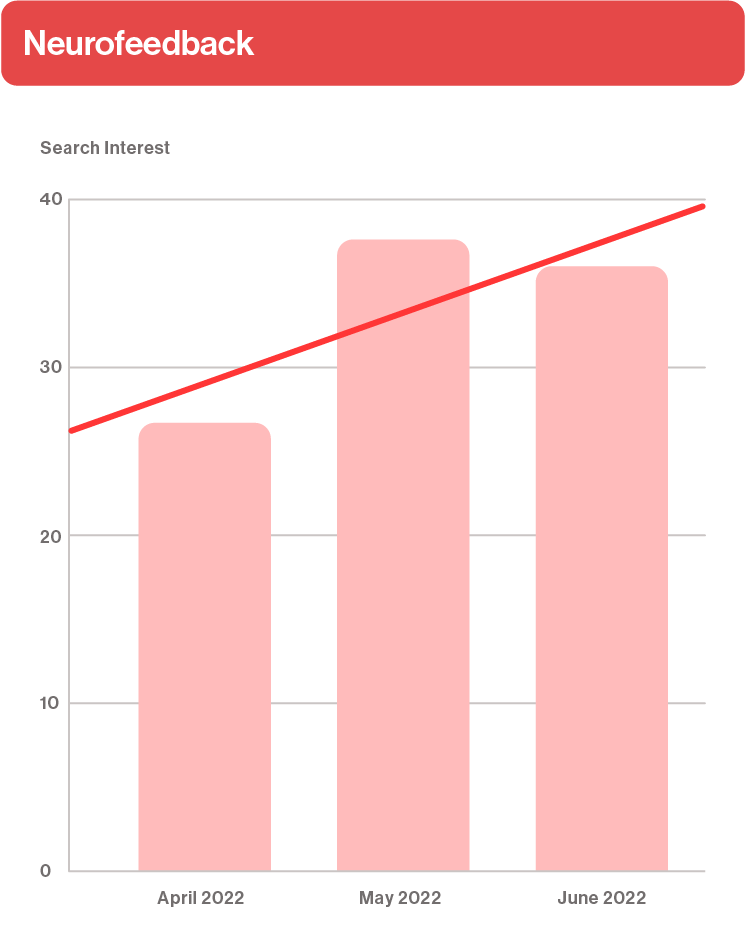 Search interest for neurofeedback as a topic under the Alzheimer’s Disease category grew by 32% over the last 3 months, from April 2022 to June 2022.

There has been an increase in interest in a potentially beneficial Alzheimer’s treatment called ‘neurofeedback’ across the last three months. Search interest was primarily coming from Utah, Oklahoma, Idaho, Colorado and New Mexico.

Interest in neurofeedback as a promising treatment to improve memory, recall and recognition among Alzheimer’s patients who had lost these abilities to some degree, extends back to 2016, when an article in the scientific journal Clinical Neurophysiology was published. It found that patients in the earlier stages of Alzheimer’s disease who received neurofeedback treatment exhibited stable or improved cognitive performance.

Neurofeedback involves training the brain to learn and rewire itself in order to compensate for damage that has been caused by the disease; it involves a structured set of activities where patients are actively engaged in cognitive tasks while receiving feedback in real time. It is a painless and non-invasive treatment that is not associated with any significant side effects. More recent research also advocates for the use of this therapy as a potential complementary treatment for dementia, and this topic has been featured in many popular news articles in 2022.

The Culture Section highlights emerging cultural trends, new products, and notable dialogue about a variety of health conditions. The purpose of this section is to zoom in on what has been happening within the cultural and professional landscape of a particular health condition–stories that are often missed by quantitative searches.

By featuring influential social media items, patient discourse, professional dialogue, product innovations, and impactful news items, this section illuminates the lived experiences of many patients, while also providing a snapshot of the developments happening around them.

Here, Quilt.AI offers a detailed and nuanced perspective of what is new and what is meaningful.

1. The Progression of Alzheimer’s Disease

People have been turning to social media–primarily TikTok–to share their experiences with how quickly Alzheimer’s disease has affected their loved ones. One trend among this group has been to post progression videos that reveal how rapidly Alzheimer’s disease can cause a loved one to deteriorate both cognitively and physically.

One such video is by Baltimore-based Audra (@audpod06), who is a caregiver to her mother who has Alzheimer’s. Her video shows the decline in her mother’s condition over a seven year period. Posted on March 23, it has since been viewed 1.6M times and has accumulated over 155K likes and over 12K comments. Similar videos posted by other users show Alzheimer’s patients declining in a much more rapid and jarring manner. The purpose of these videos is to both raise awareness and increase support for people who are dealing with a loved one’s diagnosis.

Through her Instagram page and her two published books, Lauren Dykovitz (@lifeloveandalzheimers) has branded herself as an Alzheimer’s Mentor, lending support and sharing advice based on what she learned while dealing with her mother’s early onset Alzheimer’s. Lauren’s content has been meaningful to her over 8.6K followers, particularly the ways in which she coped and found joy and meaning throughout her mother’s Alzheimer’s journey.

She struggled with guilt, grief, anger, and resentment, however, she adjusted her mindset to better manage her feelings. Among the strategies that helped her cope through caregiving were: connecting with others going through the same experience, making gratitude lists, and writing about what she was going through. She felt compelled to continue this work after her mother passed away in 2020, and she currently facilitates a support group specifically for daughters of parents with Alzheimer’s. 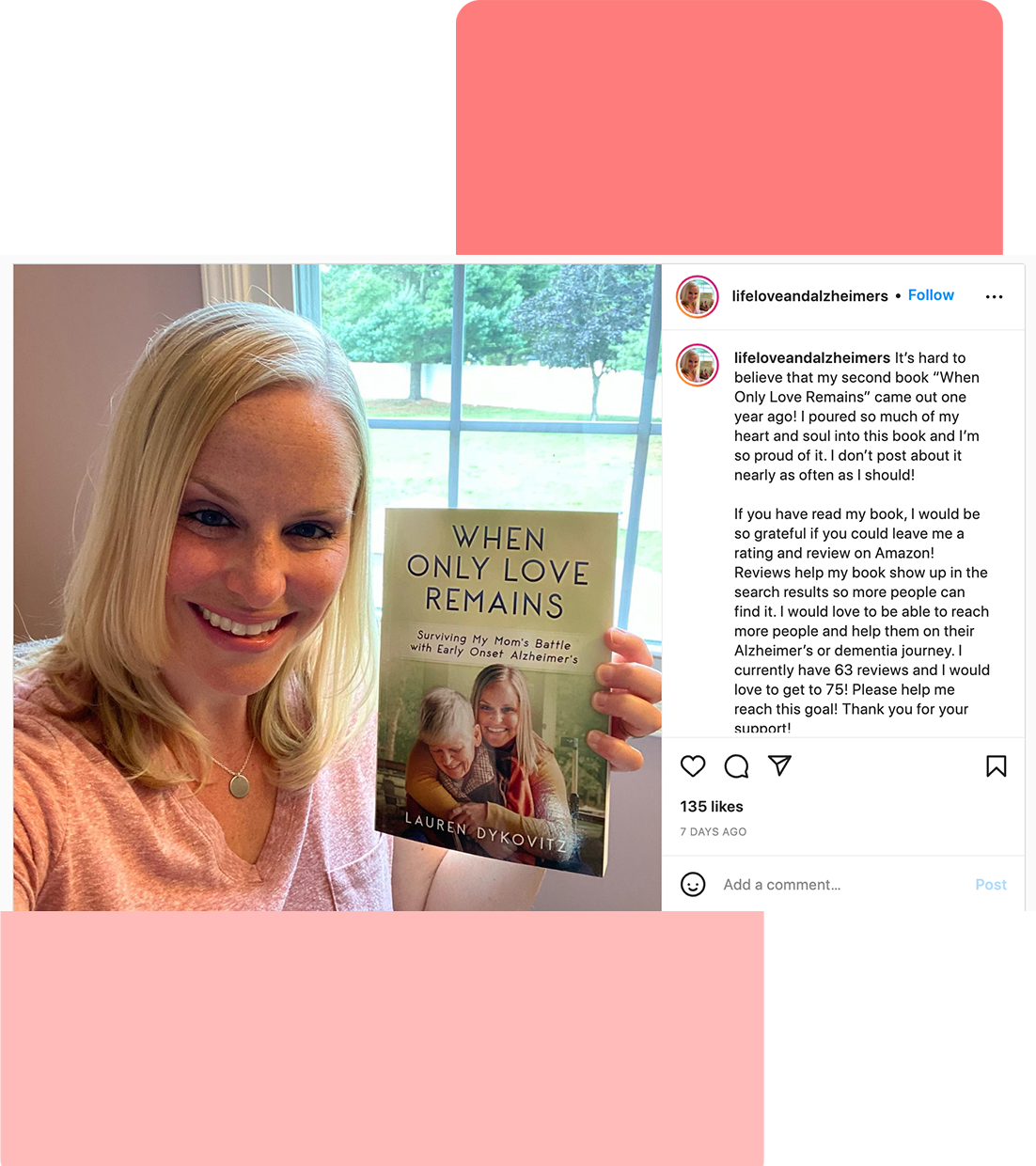 There was a Google search spike for ‘Tony Bennett’ on April 4, which was the date of the 2022 Grammys, and it was during this show that Lady Gaga performed a medley as a tribute to her long-time friend and musical collaborator. The pair were nominated five times, winning one Grammy for Best Traditional Pop Vocal Album for their album, Love for Sale.

There has been a resurgence of interest in the performances of this iconic duo over the past year. They performed two sold-out performances at Radio City Music Hall in August 2021 to celebrate Bennett’s 95th birthday. It also served as a final concert for the legendary entertainer who has been open with the public about his diagnosis with Alzheimer’s Disease since 2016. This concert re-aired on June 23, and weeks later, Bennett announced through his Twitter account (@itstonybennett) that it received four prime-time Emmy nominations.

The pair have been featured in several promotional clips navigating the memory and speech impairments that stem from Bennett’s Alzheimer’s disease. However, these snapshots also show how much he can do in spite of his condition. He exhibits incredible passion, artistry, warmth, and tenacity as a performer living with this disease, and his visibility serves to educate and inspire. 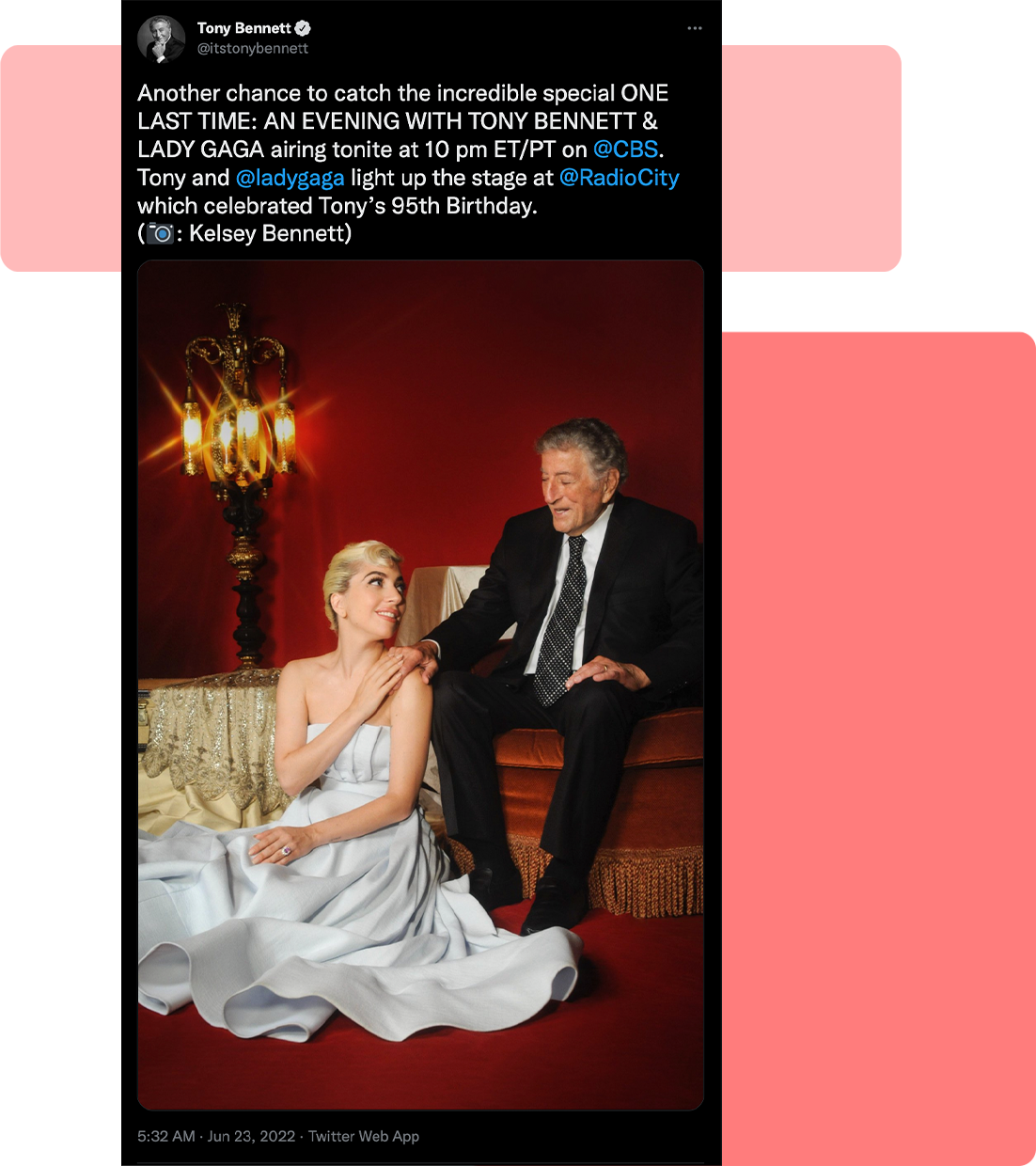 June was Alzheimer’s and Brain Awareness Month, which coincided with many fundraising initiatives and public awareness campaigns. In the U.S., much of this is organized by the Alzheimer’s Association whose social media accounts have been very busy with celebrity awareness amplification and public engagement. The Alzheimer’s Association has 103K followers on Instagram and 165.5K followers on Twitter (both @alzassociation). The hashtags #ENDALZ and #Ride2EndALZ (referencing their annual cycling fundraiser) have captured a lot of this activity on social media. There were large spikes in Google search on May 28 and June 3 under the search term ‘alzheimers awareness month.’ 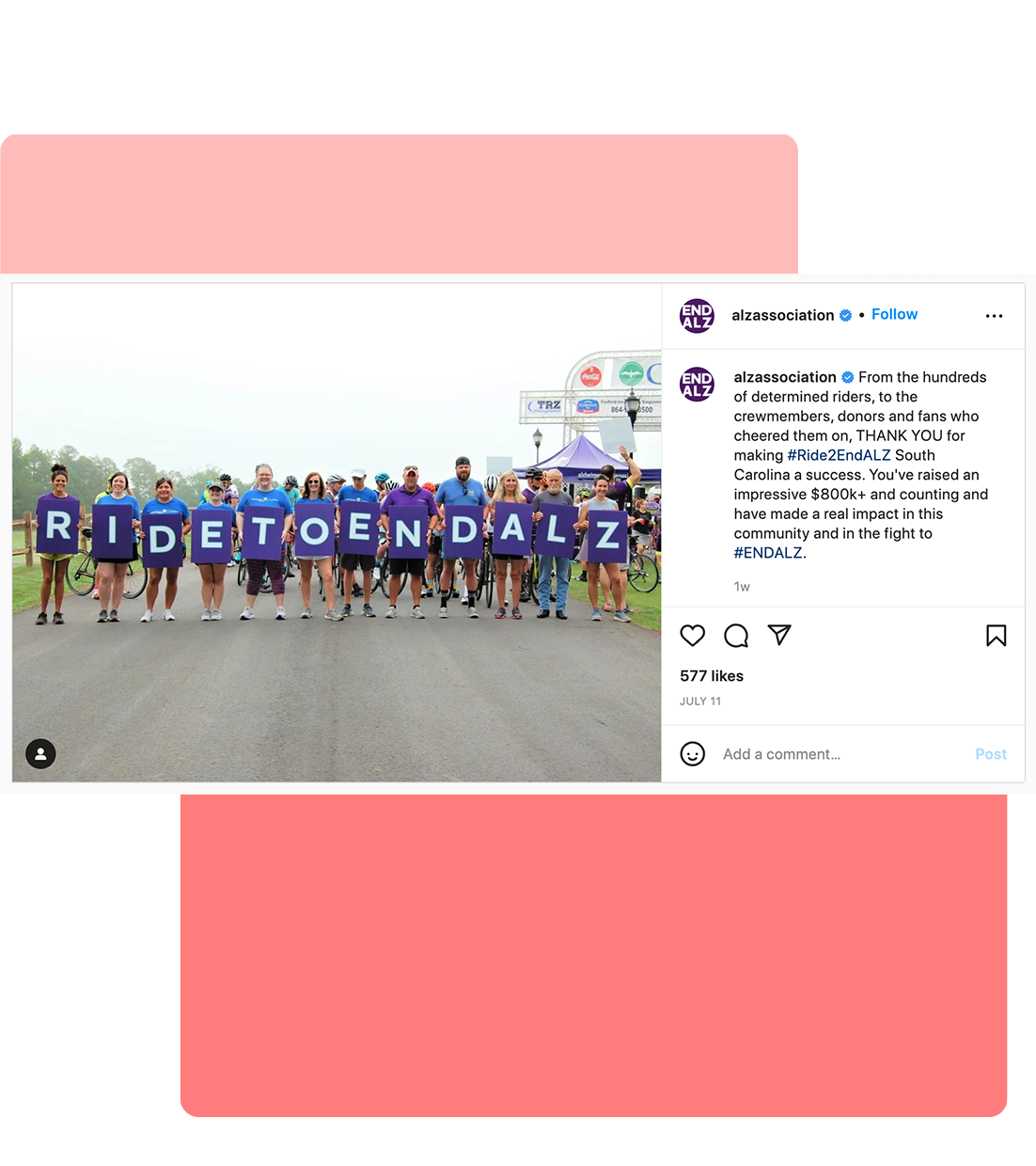 5. Alzheimer’s Journey on This Is Us

There are many TikTok videos that function as educational materials geared towards the general public. They tend to fall under two categories. The first type explains glaucoma’s gradual effects as peripheral vision becomes more limited by the disease. These posts often have simulations that depict how one’s vision might look with glaucoma, through the patient’s eyes. The second type are personal appeals, typically made by people who have received a diagnosis. These individuals tell a cautionary tale and encourage others to get their eyes checked regularly by an optometrist or ophthalmologist. One recent example of this was posted by 19-year old Zolena (@princesszolena) on May 12, and was prompted by her recent experience with receiving a diagnosis of juvenile glaucoma. 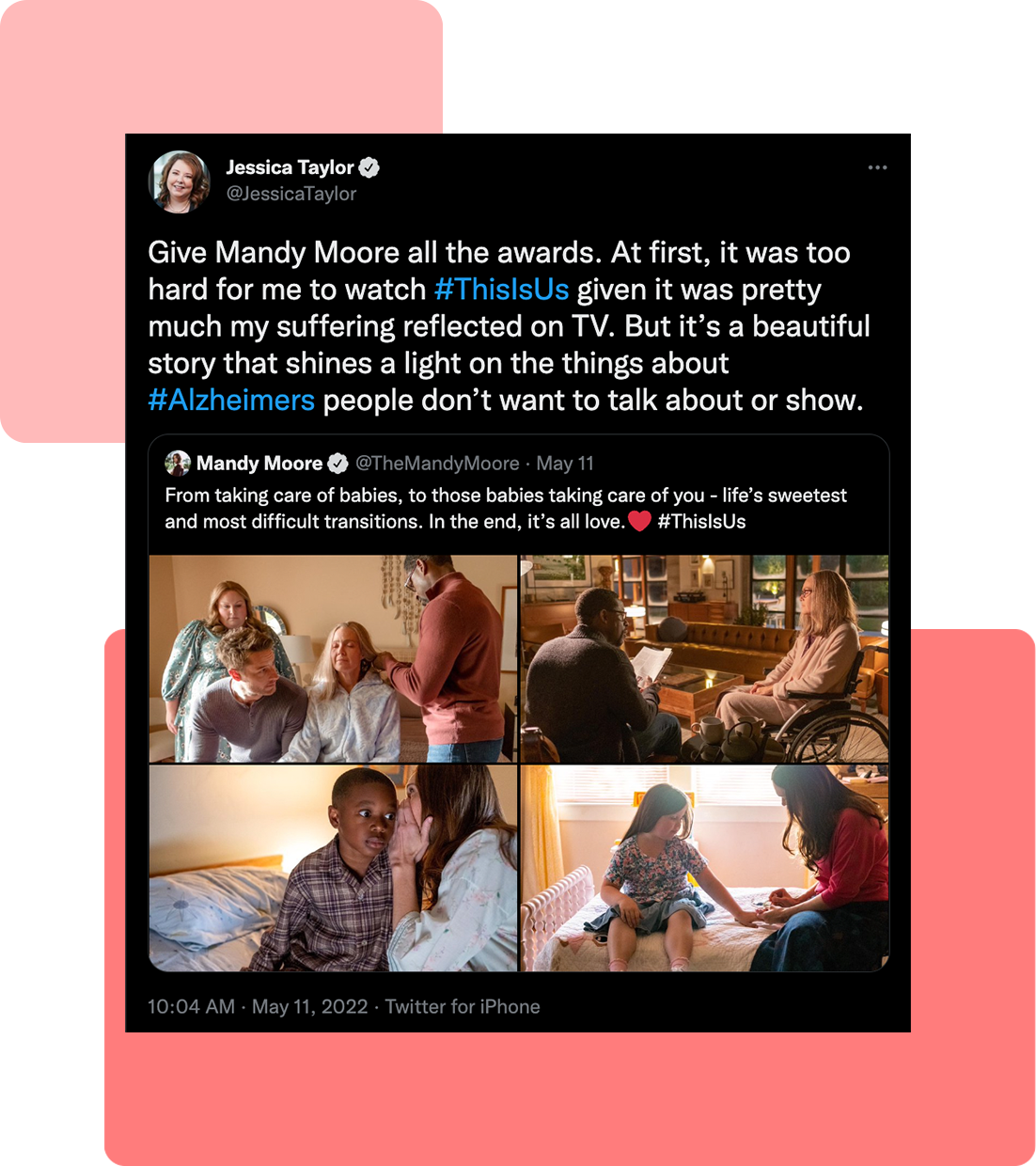